Breakthrough for climate-friendly heating with hydrogen 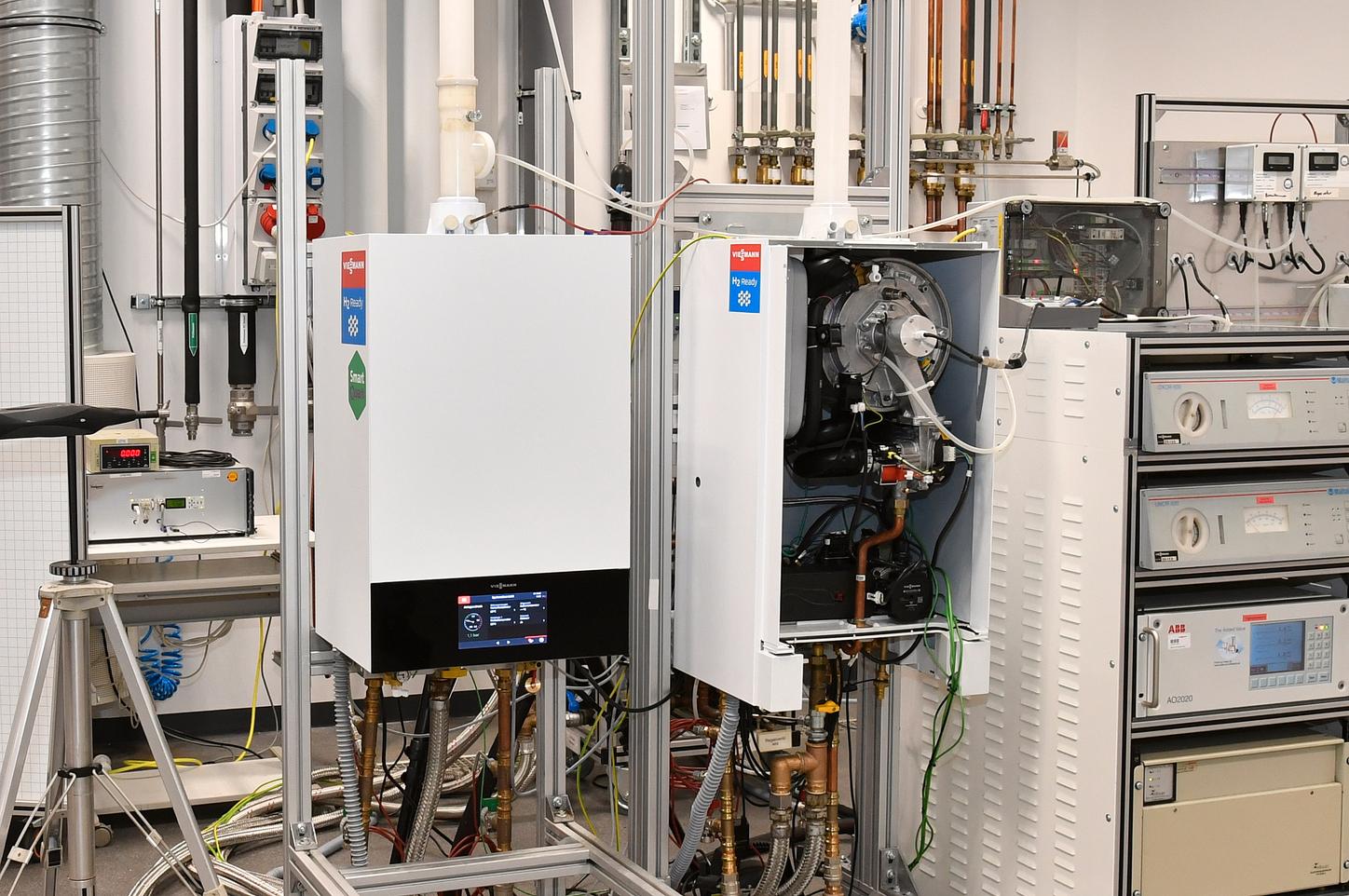 Two 100% H2-ready prototypes on the test bed: Testing is followed by the phases of qualification, endurance testing, and ultimately deployment of the new devices in actual heating systems.

Allendorf (Eder) – Achieving climate targets in the building sector is possible. Viessmann was one of the first manufacturers in the world to develop gas condensing boilers that can run on pure hydrogen and therefore emit no CO2. “With this breakthrough, we have taken a huge step towards realizing the goals of the Paris Agreement in the building sector,” says Dr. Markus Klausner, Chief Technology Officer of Viessmann Climate Solutions SE.

Conversion from natural gas to hydrogen in just a few steps

The 100% H2-ready prototypes currently running on the test beds in the research and development center at the company’s headquarters in Allendorf (Eder) in northern Hesse are based on proven, series-produced condensing boilers for natural gas and have been adapted to the requirements for operation with pure hydrogen. The main modifications include, in particular, the adaptation of the burner and the new development of the combustion, flame monitoring and control system.

The technical concept selected here allows the later series-produced units to be operated with natural gas and natural gas/hydrogen mixtures as well as with pure hydrogen. This means that the new condensing boilers can be operated with natural gas like conventional gas boilers even before the gas supply is changed over, while also being ready for pure hydrogen in the future. For operation with the new fuel source, only the burner assembly then needs to be replaced, for which a cost-effective retrofit kit is being developed. The conversion to the new burner can be carried out by a specialist installer in a few simple steps and in a short time.

After the prototype testing, the next phases are qualification, endurance testing and ultimately deployment of the new devices in actual heating systems. The first practical deployment will take place in Kaisersesch (Rhineland-Palatinate) in early 2023 as part of the SmartQuart project funded by the German Federal Ministry of Economics.

Complete hydrogen portfolio in the future

Viessmann already has extensive experience with hydrogen heating systems. Approximately 150000 gas condensing boilers from the Vitodens 300 and Vitodens 200 series were delivered to the market in 2020 alone – these can use at least 20 percent hydrogen in natural gas and can even convert a 30 percent admixture simply and efficiently into heat. Other condensing technology systems are currently under development, including those designed for greater output, fuel cells and CHP units intended for use with hydrogen as well. As the industry’s leading innovator, Viessmann will soon offer a complete portfolio for nearly every application.

Use of hydrogen is crucial to achieve climate targets

The heating market will play a crucial role in achieving climate targets by 2045. Only by exploiting all technological possibilities can the necessary decarbonization be achieved on a broad basis. This is why experts see a reliable, secure, affordable and climate-neutral heat supply solution in a sensible energy mix that uses renewable fuels in addition to electricity. “Green” hydrogen in particular will play a major role in achieving this goal. Its use, especially in existing buildings, is the logical way to make the heat supply climate-neutral. Significant CO2 reductions can also be achieved immediately by using hydrogen in the heating market in order to achieve climate-neutral buildings by 2045. As an innovation leader in the industry, Viessmann already provides a wide range of products for efficient H2-ready energy systems and solutions.