The key milestones in the Viessmann company history

From a locksmith’s business to a modern technology leader – over the past 100 years, change has been our constant companion. A look at our origins and development shows: enthusiasm for new things is in our DNA.

1928: The construction of boilers begins

Johann Viessmann lays the foundations for heating solutions in 1928. A gardener asks him to build a boiler for his greenhouse. At that time, boilers are generally made from cast iron and only slowly reach operating temperature. The ambition and inventive spirit of the tinkerer are awakened. Johann Viessmann develops and builds a new generation of steel boilers. Their advantage: they deliver heat faster and consume less fuel. Other gardeners in the region also order from Viessmann. The company founder acquires industrial property rights, utility models, and patents for his steel boilers. The production of modern boilers will build on this in the decades to come. 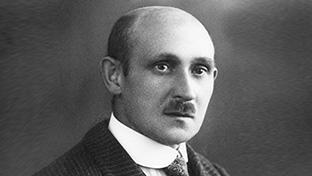 To expand production, Johann Viessmann moves his company from Bavaria to Hesse. He chooses Allendorf (Eder), where Viessmann still has its headquarters today.

Johann Viessmann is already an excellent crisis manager at the time of hyperinflation in 1923 and the world economic crisis at the end of the 1920s. He also demonstrates this strength in the period from the end of the Second World War until the generation change in 1947: he converts large parts of his business to the production of construction machinery for tamping lightweight concrete slabs and stones and repairs construction equipment damaged during the war. In doing so, he also makes an important contribution to rebuilding infrastructure in the region around the company headquarters in Allendorf (Eder).

Ten years after the move, the founder hands over the company to the next generation.

His son Hans, who was already working as a machine fitter in his father’s business before the move, takes over the company with its 35 employees. One year later, the workforce has already grown to 100 employees; Dr. Hans Viessmann founds Hans Viessmann Stahl- und Maschinenbau KG. 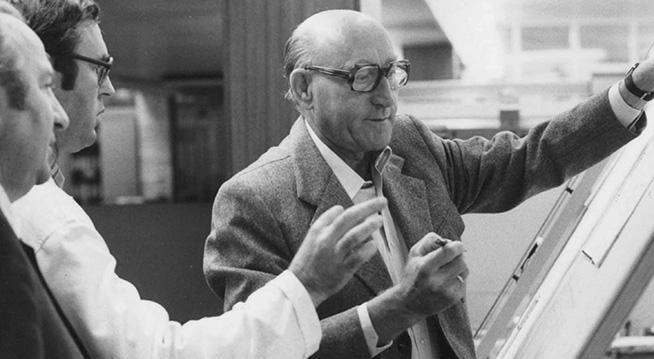 The 1950s are characterized by a far-reaching structural change in the heating industry: heating oil replaces the solid fuels that had dominated until then, especially coke. Dr. Hans Viessmann knows how to capitalize on the challenge for his company and develops boilers for the new fuel. Especially innovative: the dual fuel boiler Triola, introduced in 1957, has one combustion system for solid fuels and one for oil. The triumph of heating oil enables the fully automatic operation of heat generators and paves the way for the use of water heating on a large scale. Viessmann grows rapidly in line with demand: 350 employees produce around 5000 boilers per year.

The 1960s: New plant in Battenberg

In the early 1960s, Viessmann presents the first tankless water heater that can be cleaned mechanically. This decade also sees the development and production of the Parola special oil-gas boiler, which burns the fuel particularly cleanly and makes optimum use of the energy. In 1969, Viessmann opens another plant in Battenberg. Some 1400 employees now work for the company. Their output: 40000 boilers per year.

The 1970s: Expansion and oil crisis

The 1970s see the company facing a new challenge: the oil crisis makes the world aware of its extreme dependence on fossil fuels and leads to a significant drop in consumption internationally. Dr. Hans Viessmann also knows how to capitalize on this change: with his staff, he works on new, economical products and the first systems to use renewable energies. In 1976, Viessmann starts producing solar panels, and in 1978 launches heat pumps on the market.

The new solutions are also accompanied by huge expansion: a plant opens in Faulquemont (France) in 1972, and another one in Hof in 1973. The sites in Battenberg and Allendorf (Eder) are expanded. The really big step is also imminent: the first non-European Viessmann company is established in Waterloo, Canada, in 1978.

The 1980s: A milestone in heating technology

Environmental issues were also in the spotlight in the 1980s. In the search for solutions that further reduce pollutant emissions, Viessmann goes down in history with the biferral composite heating surface. This invention ushers in the era of low-temperature water heating in the early 1980s. The cast iron and steel boilers can be operated without a temperature limit and switched off as soon as no heat is required. Viessmann sells its one millionth Vitola boiler in 1988.

The 1990s: Generation change and internationalization

Dr. Hans Viessmann transfers sole management of the company to his son Martin and steps down from the helm. His record: more than 1500 industrial property rights and patents have been registered by the second-generation entrepreneur. 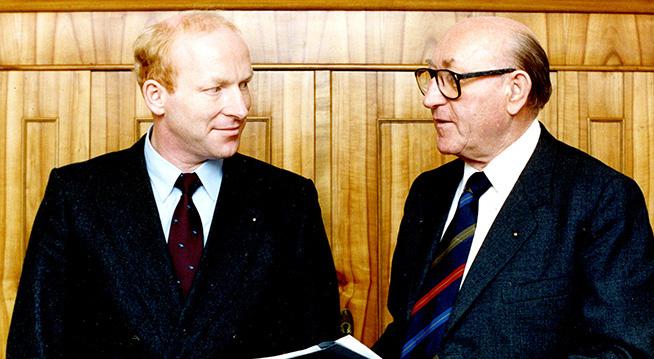 Dr. Hans Viessmann hands over the management of the company to his son Martin

Professor Dr. Martin Viessmann internationalizes the company. In the 1990s, national companies are established in Hungary, Poland, and the Czech Republic. The first plant is opened in Beijing at the beginning of the new millennium. The start of sports sponsorship in 1993 also increases international awareness for the Viessmann brand.

Under the leadership of Professor Dr. Martin Viessmann, environmental issues are right at the top of the agenda. The greenhouse effect occupies society and industry. The reduction in CO2 emissions by 25 to 30 percent by 2005, as stipulated by the German government, makes energy-efficient condensing boilers a sought-after supplier of heat. Gas heating systems account for a growing portion of sales. Professor Dr. Martin Viessmann also puts the focus on wall-mounted gas appliances. To set up the new production line at the main plant in Allendorf (Eder) and not in the Czech Republic, despite higher costs, the company management and employees form “Bündnis für Arbeit” (Alliance for Work) in 1996. 800 new jobs are created.

In addition to internationalization, Professor Dr. Martin Viessmann seeks further opportunities to improve competitiveness – and breaks new ground. No machine stays in place at the headquarters in Allendorf (Eder). Viesmann launches a new production system, VITOTOP, which is based on lean production and aims for a continuous improvement process. The employees make a crucial contribution to increasing efficiency: more than 120000 suggestions for improvement are made every year.

In 2005, the existing projects for efficiency in work, materials, and energy are pooled under the strategic sustainability project “Effizienz Plus” (Efficiency Plus). The landmark project pursues a two-pronged strategy: increasing efficiency and replacing fossil fuels with renewable energies. Part of the project is the world’s first power-to-gas plant that uses a biological process to generate methane. Thanks to “Effizienz Plus”, Viessmann already achieves the German government’s energy targets for 2050 by 2012.

The 2010s: Digitalization and Viessmann turns 100

The company also takes another trend into account: heating and cooling are merging together, warmer countries offer additional market potential. The reintegration of Viessmann Kühlsysteme GmbH in Hof in 2012 is not only a strategic move, it’s also a project close to Professor Dr. Martin Viessmann’s heart. In 2013, the diversification of the product range is followed by a breakdown of the business areas into the divisions Heating Systems, Industrial Systems, and Refrigeration Systems. In 2014, Viessmann is the first supplier to launch a series-produced fuel cell heater – another technological milestone. It is characterized by its efficiency, environmental friendliness, and reliability.

Viessmann prepares for the next generation change: after more than 37 years in the company, in 2016, Professor Dr. Martin Viessmann hands over operational management to the current CDO Joachim Janssen and becomes Chairman of the Board of Administration. Professor Dr. Martin Viessmann recognized early on that digitalization represents a major challenge for the industry. At the same time, he sees it as a great opportunity and indispensable to the success of the energy revolution. He brings his son Maximilian Viessmann on board as the new Chief Digital Officer.

In its anniversary year 2017, Viessmann sets the further course for the future.

In Allendorf (Eder), the technology center “Technikum” is inaugurated. Costing 50 million euros, this is the largest single investment in the company’s one-hundred-year history. Maximilian Viessmann takes on the role of Co-CEO alongside Joachim Janssen. The management of the company is therefore now in the hands of the fourth generation. 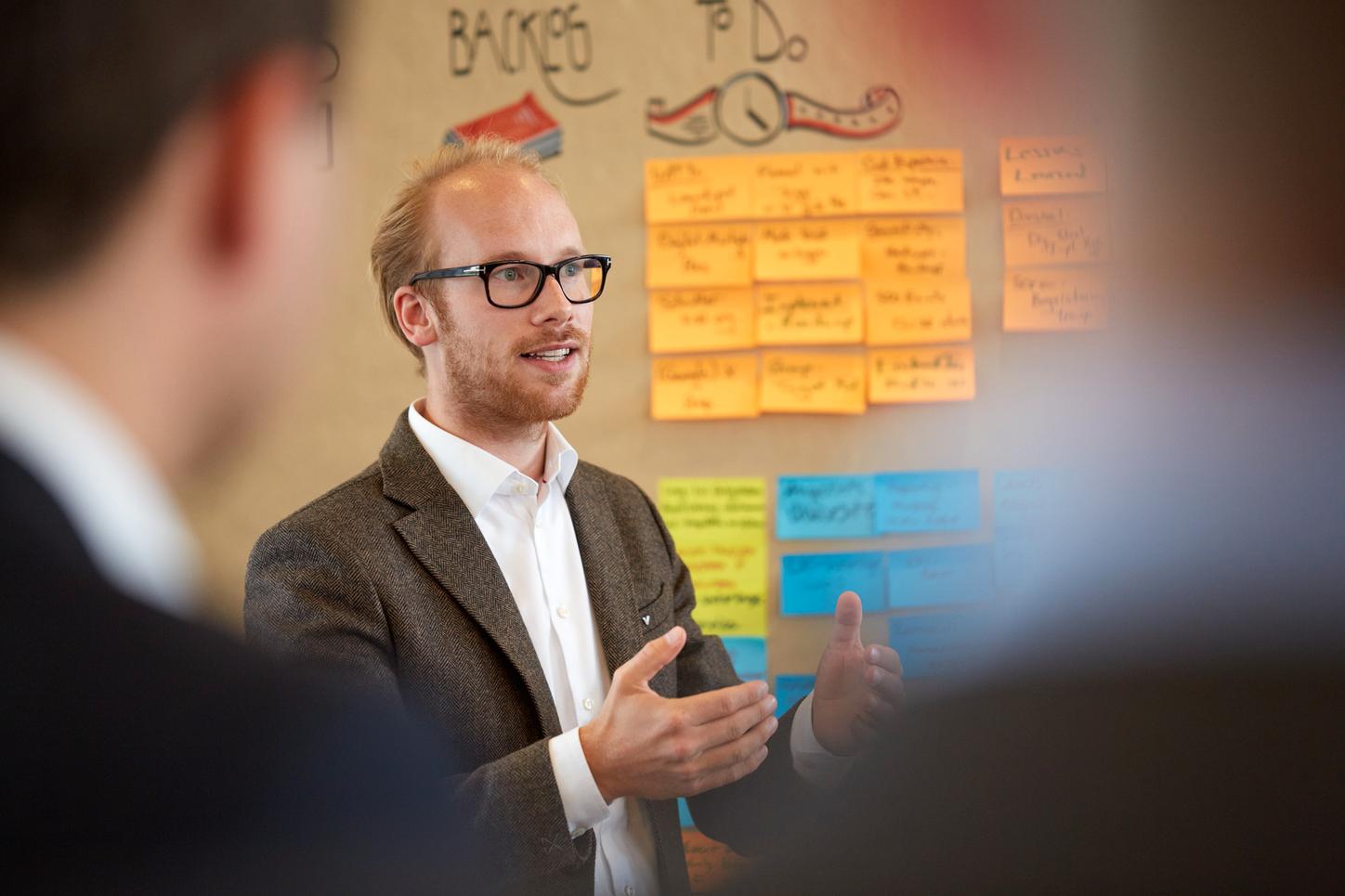 In its 102nd year of existence, the company Viessmann is repositioning itself once again. The Viessmann Family Holding is established. The third and fourth generations are fully represented in the new company structure, to shape the further development of the company together.