Heating with hydrogen – Innovative condensing technology for a climate-neutral future

The heating sector and hydrogen are destined to be together | These days, up to 20 percent hydrogen can be added to natural gas, significantly reducing CO2 emissions | Viessmann is developing a complete portfolio of products to use hydrogen 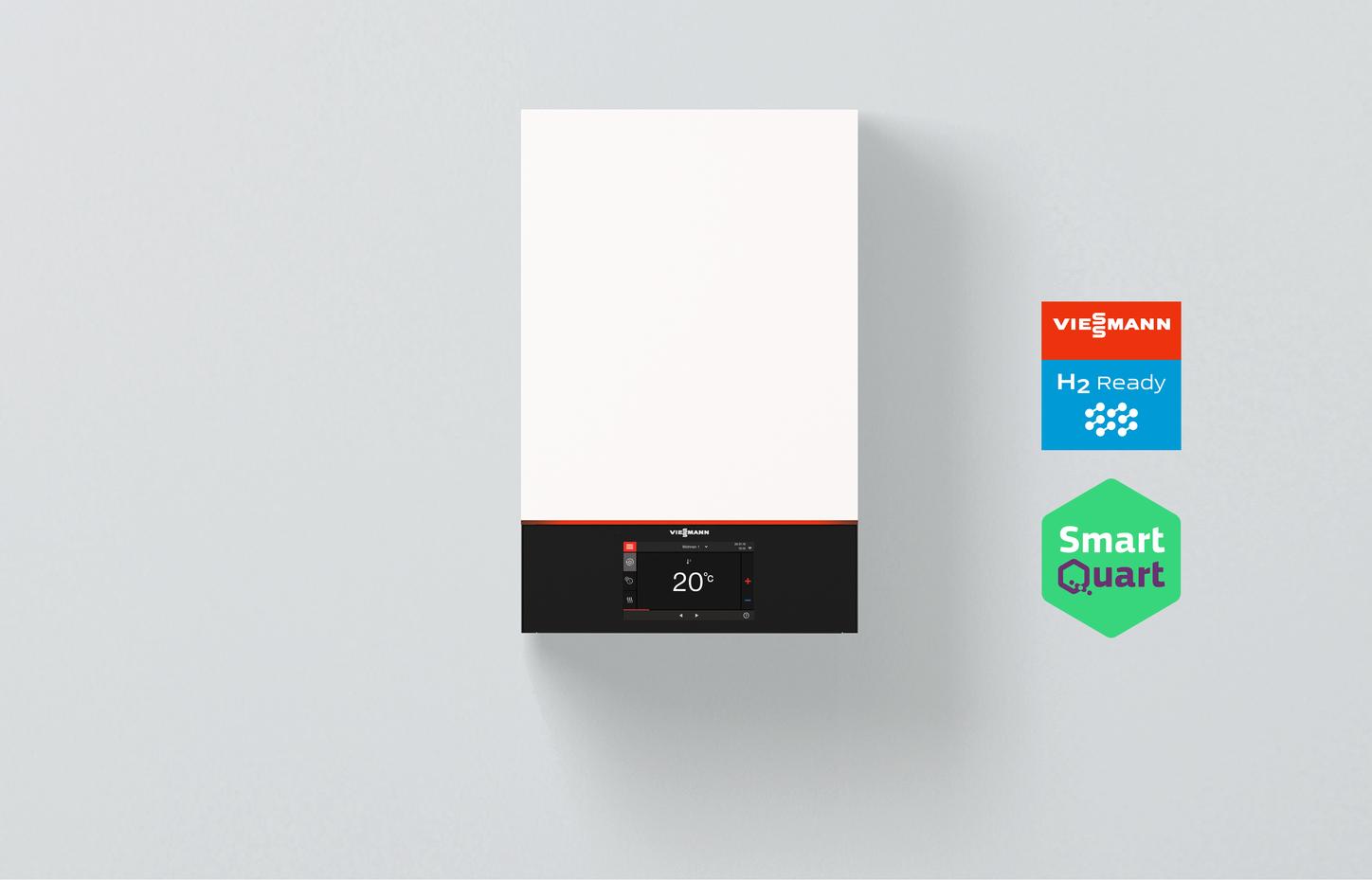 The innovative “H2ready” condensing boilers will be able to switch from natural gas or natural gas/hydrogen mixtures to pure hydrogen with minor effort. Their field tests will be carried out in Kaisersesch as part of the SmartQuart project, funded by the German Federal Ministry of Economics and Technology (BMWi).

Allendorf (Eder) – German and EU policy has set the ambitious goal of becoming climate-neutral by 2050 and reducing CO2 emissions to zero. These can only be achieved without burning fossil fuels. Instead, in the future there will be a mix of electrical power-based solutions in the heating sector, like heat pumps, and renewable fuel sources, like synthetic methane and hydrogen produced without carbon dioxide. Hydrogen, in particular, will play a key role. It is the logical way to make the heating market climate-neutral.

This new fuel is predestined for the heating sector

Hydrogen for the purpose of heating goes hand-in-hand with electrification – it enables consumers and companies to soundly invest in CO2-free building heat supply. A pilot study by the German Energy Agency (dena) shows that a mix of electricity and hydrogen in the building sector could reduce energy system costs by at least EUR 260 billion by 2050. The expansion of power grids and reserve power plants – which is necessary to completely electrify the heating sector – would be substantially reduced by utilizing the existing gas infrastructure for hydrogen.

Furthermore, this new fuel makes it possible to significantly reduce CO2 emissions in a very short time frame. It is already possible to add up to 20 percent hydrogen to natural gas in the grid. This could reduce greenhouse gas emissions by about seven percent per year. Hence, it would quickly and effectively make a major contribution to climate protection.

The technology necessary to make use of such natural gas-hydrogen mixtures to heat buildings is available and already in use in the market in thousands of installations. Essentially, gas condensing boilers of the latest Vitodens 300 and Vitodens 200 generations can already be operated today with 20 to 30 percent hydrogen. House and apartment owners who opt for these modern wall-mounted and compact devices are ideally equipped for the future.

National and international initiatives will drive the expansion of a hydrogen infrastructure in the coming years. Accordingly, the German government presented its national infrastructure in the summer of 2020. It announced funding of EUR 9 billion for the targeted development of a hydrogen infrastructure. At the same time, the EU Commission published a hydrogen strategy that provides for a strong expansion of production capacity. Hydrogen production by means of renewable energy sources is expected to rise to up to 1 million tons by 2024, and to 10 million tons by 2030.

Today, numerous pilot projects are already being supported. One example is the establishment of a hydrogen infrastructure in the Kaisersesch region of the state of Rhineland-Palatinate in Germany. Within the scope of the “SmartQuart” project, funded by the German Federal Ministry of Economics and Technology (BMWi), a complete hydrogen infrastructure will be built there by 2023. It will include the production of renewable electricity for the operation of the electrolyzers, the storage and distribution of the hydrogen, and the distribution of hydrogen for its use in the sectors of heat and power supply, industry, and transportation.

Viessmann has been involved in this initial field trial for an era of sustainable energy since the beginning. In Kaisersesch, Viessmann will be testing condensing boilers for operation with pure hydrogen and also testing the practical operation of hydrogen-compatible fuel cell heating systems.

“We create living spaces for generations to come” – that is Viessmann’s mission. In order to make reliable, safe, affordable and climate-neutral heat supply possible in the future, a team of engineers and technicians in the Viessmann Innovation Center – Viessmann’s research and development center located at the company’s headquarters in Allendorf (Eder) – is currently testing “H2ready” condensing boilers for operation with pure hydrogen. Modern, gas-adaptive wall-mounted boilers for natural gas, with a fully premixing surface gas burner, serve as the basis. The combustion properties of hydrogen, which differ significantly from those of natural gas, require new development of the combustion, flame monitoring and control system, as well as adaptation of the burner components.

After the prototype testing, the next phases are qualification, endurance testing, and ultimately deployment of the devices in Kaisersesch beginning in early 2023. These devices will most likely be launched on the market in 2024; it is expected that further regional gas networks in Germany will subsequently distribute pure hydrogen to consumers. The innovative “H2ready” condensing boilers will be able to switch from natural gas or natural gas/hydrogen mixtures to pure hydrogen with minor effort. This ensures their future-compatibility in the transitional phase from natural gas to hydrogen.

Other condensing technology systems are currently under development at Viessmann, including those designed for greater output, fuel cells and CHP units intended for use with hydrogen as well. As the industry’s leading innovator, in a few years Viessmann will offer a complete portfolio for nearly every application.

The most common element in the universe has numerous positive properties. Hydrogen is:

However, hydrogen differs considerably from natural gas in terms of its combustion-related properties. Thus, the volume-based energy density for gaseous hydrogen of approximately 3.0 kWh/m³, under normal pressure and at normal temperatures, is comparably just one third of that of natural gas (9.97 kWh/m³).

Besides that, the naturally occurring hydrogen on Earth is basically only present in a chemically bound form, e.g. as water. In this form it covers over two thirds of the Earth’s surface. Earth’s total water resources amount to roughly 1.386 billion cubic kilometers. There are also important hydrogen-containing compounds found on Earth in naturally occurring gases, such as methane, as well as in crude oil.

Green, gray, blue, and turquoise hydrogen – what is the meaning?

Hydrogen must first be produced in order for it to be used as a fuel source and raw material. There are essentially four methods:

Forecasts show declining production costs, driven by decreasing costs for electrolysis and renewable energy sources for electrical power generation, as well as the implementation of carbon capture and storage (e.g. in the North Sea). According to the international market research institute BloombergNEF, green hydrogen could even compete with natural gas by 2050.