"Green living in the countryside with park-like outdoor facilities and fast metropolitan connections" - under this motto, a total of 62 semi-detached and terraced houses are being built in the "Langweid Village" and "Mering" development areas. With the Viessmann fuel cell, the new building project relies on innovative technology for its energy concept. 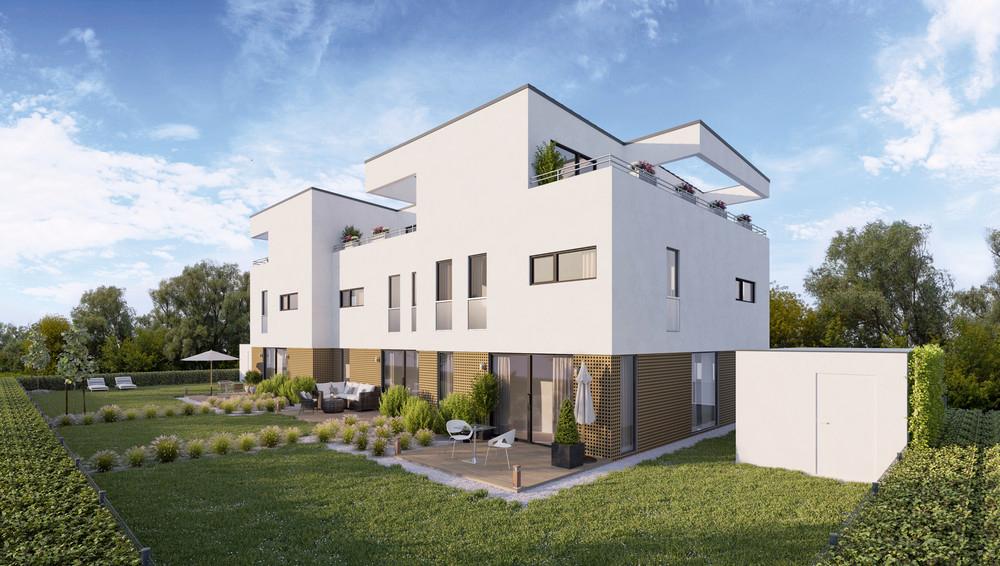 In their energy concept, the creators of “Langweid Village” – M. Dumberger Bauunternehmung GmbH & Co. KG – are banking on an innovative technology that is becoming more and more popular in home building: the Viessmann fuel cell as a power-generating heating system. In Langweid, where the groundbreaking ceremony took place, and in a comparable project in Mering with 43 residential units, a total of 105 fuel cell heaters are being installed. An outstanding project for the sales consultant in the Augsburg branch, Stefan Schäffer, and branch manager Andreas Ruwiedel.

“The fuel cell combines innovative technology and economic efficiency,” said sales manager Jens Dammer from the responsible energy supplier “erdgas schwaben” during the groundbreaking ceremony. “The fuel cell uses the hydrogen contained in natural gas efficiently and thus saves costs in generating electricity and heat. The only remaining products are water and small quantities of CO2. We see this as a pioneering contribution to environmental protection.”

Gerhard Failer, sales manager at Dumberger, also sees enormous potential in fuel cell technology: “The future belongs to decentralized energy generation. Fuel cells are therefore the ideal addition to our highly insulated buildings, providing them with a reliable and cost-effective supply of heat and electricity.”

Viessmann is supplying a total of 105 Vitovalor 300-P fuel cell heaters for the new buildings. These generate power with an output of 750 watts, which is consumed in the house itself. The heat produced (1 kilowatt) is used for heating and hot water; peak heating requirements are covered by the integrated gas condensing boiler.

Generating electricity and heat in your own four walls in this way makes you less financially dependent on the electricity grids and rising electricity prices. In addition, the energy technology used meets the highest requirements of the houses according to the KfW55 standard of the German Development Loan Corporation (EnEV 2016).

Since August 1, 2016, fuel cell technology has become even more interesting for residential buildings because the Federal Ministry of Economics provides attractive grants for installing a fuel cell heater. In addition to the basic amount of 5700 euros, a performance-related amount of 3 600 euros is paid for the Vitovalor 300-P.

Building contractor Michael Dumberger is convinced that “Langweid Village” is an exemplary project and sees huge potential in fuel cell technology for the future: “We are not building for the moment, but for generations. This is why it’s so important to us to use forward-looking technologies”.

According to a recent survey, almost half of all German citizens can see themselves heating with hydrogen. This is because hydrogen burns in a CO2-neutral manner and therefore protects our planet. Viessmann's H2 ready gas condensing boilers can already efficiently convert up to 30 percent hydrogen content in natural gas into heat, thus making them fit for future.