The United Kingdom is a large market for Viessmann. Here, Technical Director Christian Engelke is responsible for increasing sales and for helping the German headquarters better understand the British mentality. 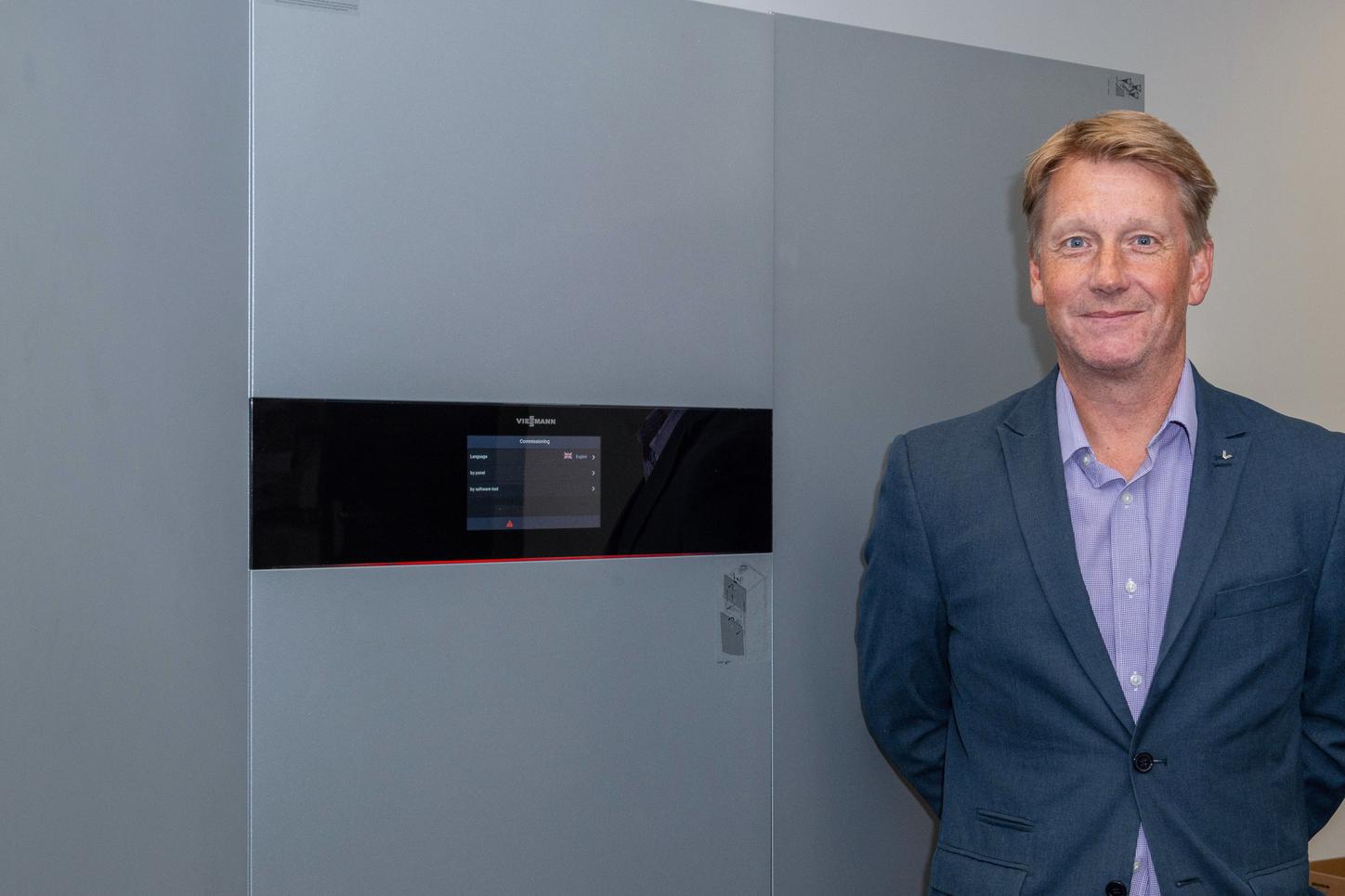 When Christian Engelke speaks English, he has a German accent. After all, he was born in Hameln in Lower Saxony. But when he speaks German, there is always a hint of English. Christian has, after all, lived on the British Isles since 1996. He has long been mistaken for an Englishman in Germany. “I’m often asked where I learned German so well,” he laughs. This dual existence also characterizes a little his role as Technical Director and Product Manager at Viessmann in Telford, a planned town of 160 000 inhabitants in Shropshire near Birmingham. “I’m a kind of intermediary between the German headquarters and the British market.”

And the United Kingdom is “a huge market,” stresses 54-year-old Christian. With a homeownership rate of around 70 percent, some 27 million British households need to be fitted with heating systems. A good 1.6 million wall-mounted gas condensing boilers are installed there every year. In Germany, this figure is only 500 000 because 60 percent of Germans rent their homes. But the British market is also demanding: since the land is already expensive, there is little money left over for the houses and their features. There are no basements, the boilers must be placed in the kitchen or hallway, and they must not cost much.

However, Viessmann has an advantage as a supplier: “The British love German brands,” says Christian. Since joining Viessmann in 2007, the university-educated mechanical and process engineer, who moved to the UK for his thesis on energy-saving houses, has been able to help grow the British branch substantially in twelve years – “despite the 2008 global financial crisis,” Christian adds, proudly. Viessmann has now established itself as a premium brand and is number four in the British market. “Viessmann Ltd. has not only been named ‘Best Buy’ by consumer magazine Which? for the third time in a row, we are also leading the way when it comes to smartphone control and remote control.”

We are leading the way when it comes to smartphone control and remote control.

Christian is the UK explainer for the headquarters in Allendorf (Eder). “We develop and manufacture in Germany, but we have to sell here in Great Britain.” Luckily, Christian is married to a British woman and has two daughters. This helps him to understand the British mentality. “We live a little differently in Britain to how we do in Germany,” he says. “The buildings are smaller, the gas is very cheap because it is self-produced, and therefore it is wasted. This means that heating technology generally lags behind here in terms of efficiency and emissions.”

In a country where heating costs are low, Viessmann technology cannot score points with energy efficiency as it usually does. Instead, explains Christian, the British demand first-class service from German companies: “Around the clock. The customer complains if we are not available at three o’clock in the morning. Spare parts must be delivered in next to no time.” Christian has to convey such needs from the island kingdom to the company management in northern Hesse. He calls this “balancing customer expectations”.

Nevertheless, it is Christian’s ambition to change the British heating culture. “Heating technology needs to become sexy,” he says. “Heating has never been much of a consumer focus. We want them to think more about heating in the future.” Issues such as sustainability and environmental protection have so far played a much smaller role than in Germany. “The British are more relaxed when it comes to ecological aspects. An awareness of climate change is only just developing.”

Hierarchies are flattening out

To support this change in thinking, Christian is involved in numerous associations and committees and seeks a dialog with the government. He promotes intelligent technical solutions, helps shape regional standards, and attempts to raise ecological awareness. The digital change at Viessmann is to his advantage. “The British want to pay fair prices for their boilers and installations. Online orders for a complete boiler replacement are now commonplace on the market. We are adapting to this. We have to be competitive while offering the best quality and reliable service.”

We have to be competitive while offering the best quality and reliable service.

The generation change at the top of the company also reminds him more and more of his Anglo-Saxon adopted home: “In the UK, the way management treats employees is much more relaxed than in Germany. This results in a more pronounced feeling of togetherness.” This is precisely the direction in which the company is moving even after the handover from Professor Dr. Martin Viessmann to his son Max. “The senior boss is very popular and enjoys great authority. Since Max Viessmann became Co-CEO, the hierarchies have become flatter.” There is much more communication – via social media, the company app, and in workshops. And above all: “The company is now more globally focused.”

In addition to its products, Viessmann provides comprehensive digital services and value added services. Find out more about our apps and services here.

climony helps to understand your own impact on the climate and to reduce and offset emissions. Learn more about the app here.

Viessmann has been involved in winter sports for decades – the promotion of young people is also very important to us. Find out more about the junior team here.